Your Responsive Website.
More Font Styles for Your Value Different.
Color theme and Layout ready to use.

* * Koh Khai, about 15 kilometers west of Koh Tarutao, is an island in the middle.  Although it is a small island, it is a beautiful island unlike any other.  There was a large natural rock arch with a wide hole in the middle that several people could walk and stand in line.  The origin of the island's name comes from the clean white sand like eggshells and coral reefs in general.  Because of this clean sandy beach, sea turtles come to lay their eggs every year.  However, Tarutao National Park does not allow tourists to stay overnight on the island.  Because there is no fresh water source on the island, but a passenger boat from Koh Tarutao to Koh Lipe  Usually runs past Khai Island which is already on the way * * 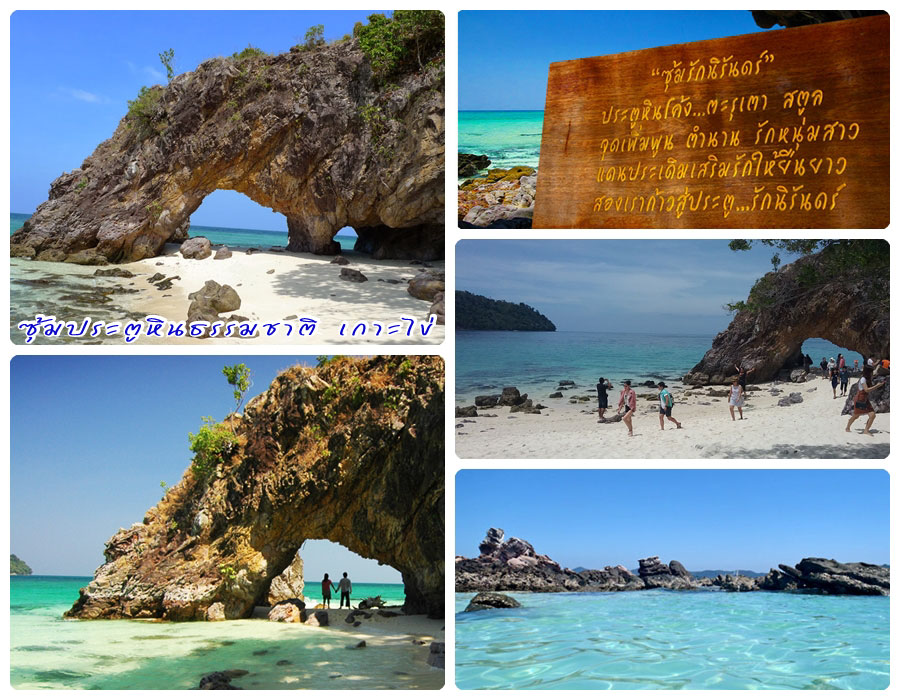 * * Koh Rokroy is a small island with beautiful pure white sandy beach on the northeast side of the island.  The sea water is clear turquoise blue.  The sand under the sea has a low slope suitable for swimming on the beach.  Most of the long-tail boat charters and tour operators of the Dong Islands take visitors to the island's beautiful beaches for lunch.  Anyone who wants to see the scenery around Rokroy Island from above can walk up the low hill next to the beach.  On this hill there is a short dirt path that allows you to walk around the scenery almost 360 degrees. In addition, bridges and wooden terraces have been built for tourists to stand and look at the panoramic sea view.  For tourists who prefer snorkeling, just swim 50 meters away from the beach on the northeast side of  Rokroy Island and you will find a moderately rich coral reef.  However, there is a caveat that coral reefs in this area are very close to the surface.  (The depth from the water surface to the sea floor is only 2 – 3 meters), and there are also a lot of sea urchins.  If you enjoy diving too much, it could lead your limbs to converge on sea urchins or slither against coral reefs and get hurt. * * 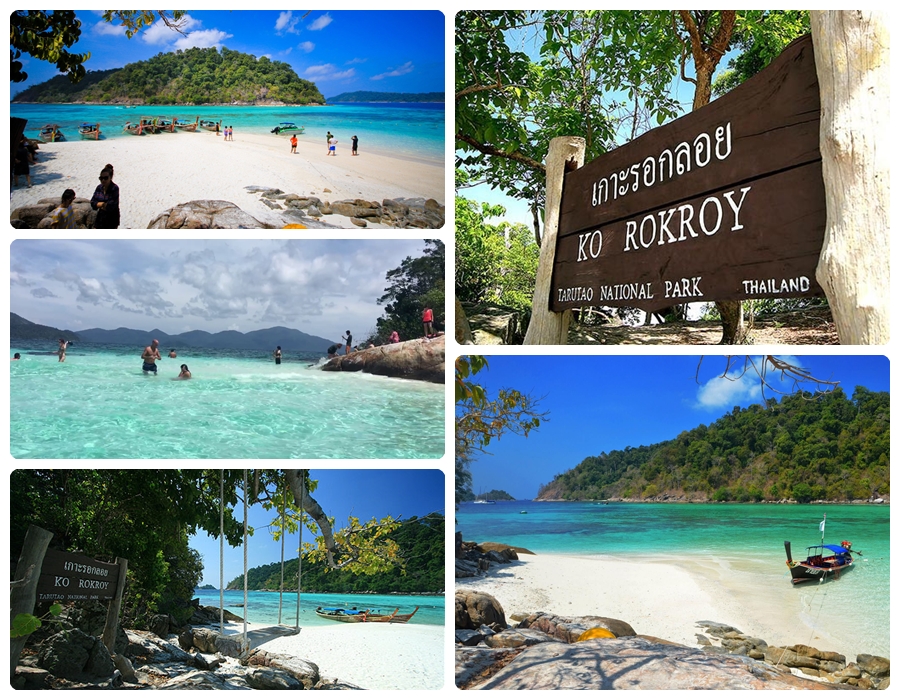 * * Koh Rawi is an island located in the Tarutao National Marine Park.  It is an island that has a national park protection unit located on this island to serve tourists.  Tourists tend to come for lunch and activities on this island because of its beautiful sandy beaches and various amenities. Rawi Island is the closest island to Adang Island, only 1 kilometer apart.  And the most outstanding beach of Rawi Island is White Sand Beach, a spot where we can swim or practice snorkeling in this area.  To the west of the island, there is a pointed tip jutting out into the sea. This cape is called “Laem Tanyong Barbie” it is a fish-rich cape that is truly a paradise for fishing enthusiasts.  For forest lovers on Rawi Island, there are hiking trails in Ao Talo Palian and Ao Luek. Along the way, you will find a variety of tropical plants and can also see a variety of birds * * 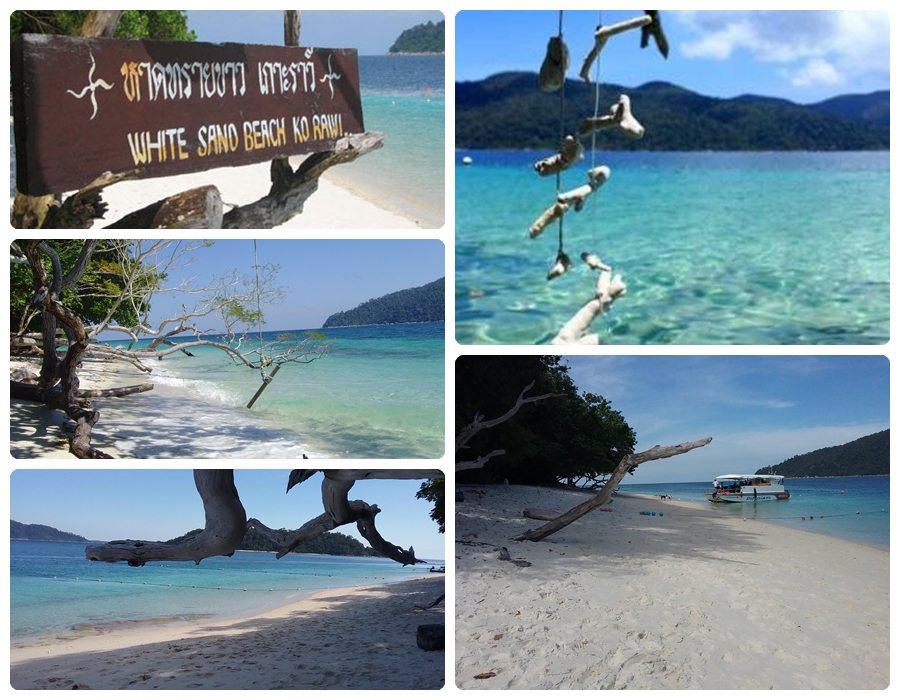 * * Koh Hin-Ngam is a small island in the group of Adang Island, Rawi Island, Tarutao National Park.  This is an island with no sandy beach at all, only small trees growing on it, and around the island there are many rounded black stones piled up all over the island.  This is a distinctive feature that exists only on one island in Thailand.  These stones have both large and small when were swash together by the water causing these stones to pile up strangely and the round and beautiful formations of all the stones were caused by the erosion of the wind and waves. These stones when splashed by the sea will gleam and shine dark black, reflecting in the sunlight, looks very beautiful. Highlight of this island Even though it's just a small island, Hin-Ngam Island has something special that you can't find anywhere else. That is an island without sandy beach, It is a rocky beach on the whole island. In front of the beach there are rounded stones of the same size when the sea is rising these stones are soaked in a glistening luster that reflects all over the beach. These stones are gray-black in color extending into a pointed end cut out into the emerald sea. When the tide is low, the rocky beach appears wider. In the middle of the island is a small forest that is completely green. and there were many large stones scattered in the middle of the island * *

* * Koh Hin Sorn is an island where two large rocks are amazingly stacked on top of each other.  It looks like a rock formation in the middle of the sea, which is not far from the Dong Island.  It looks like a submarine floating in the middle of the sea.  Some people call that area the submarine mound.  Around these rocks is a snorkeling site, but the current is quite strong because it is an open sea.  This island area is one of the most beautiful sunset viewpoints in Tarutao National Park and next to this island there will be no other islands of Thailand to be seen again. This island is considered the last island in the Andaman Sea. * * 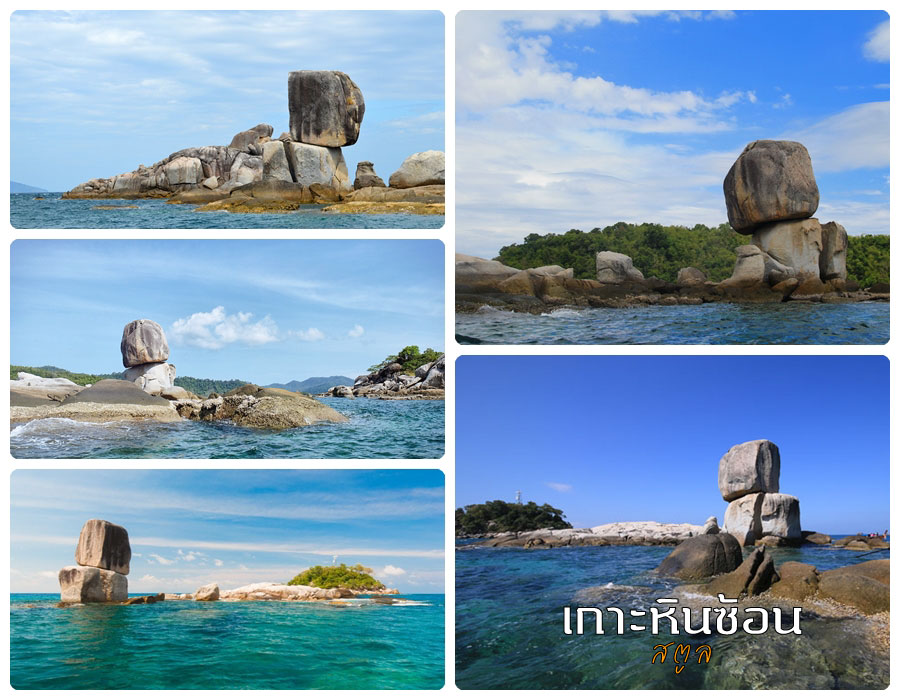 TARUTAO NATIONAL PARK
* * Tarutao National Park is located in the Andaman Sea in the Malacca Strait of the Indian Ocean.  It has an area of ​​approximately 931,250 rai or 1,490 square kilometers.  Covering the land of Koh Tarutao, Koh Adang, Koh Rawi and other islands in Koh Sarai Subdistrict, Muang District, Satun Province, it was declared a national park on April 19, 1974. It is the 8th national park in Thailand.  Tarutao  Consisting of 51 large and small islands, 7 large islands are Koh Tarutao, Koh Adang, Koh Rawi, Koh Lipe, Koh Klang, Koh Batuang and Koh Bissi.  It can be divided into two large islands, namely the Tarutao Islands and the Adang-Ravi Islands.  The southern part of the national park is only 4.8 kilometers from the Thai-Malaysian border. In 1982, Tarutao National Park was recognized by UNESCO as an ASEAN Heritage Site. The beauty and richness of nature, both underwater and onshore, attracts both Thai and foreign tourists to uninterrupted trips to the beautiful islands in the Tarutao National Park area * * 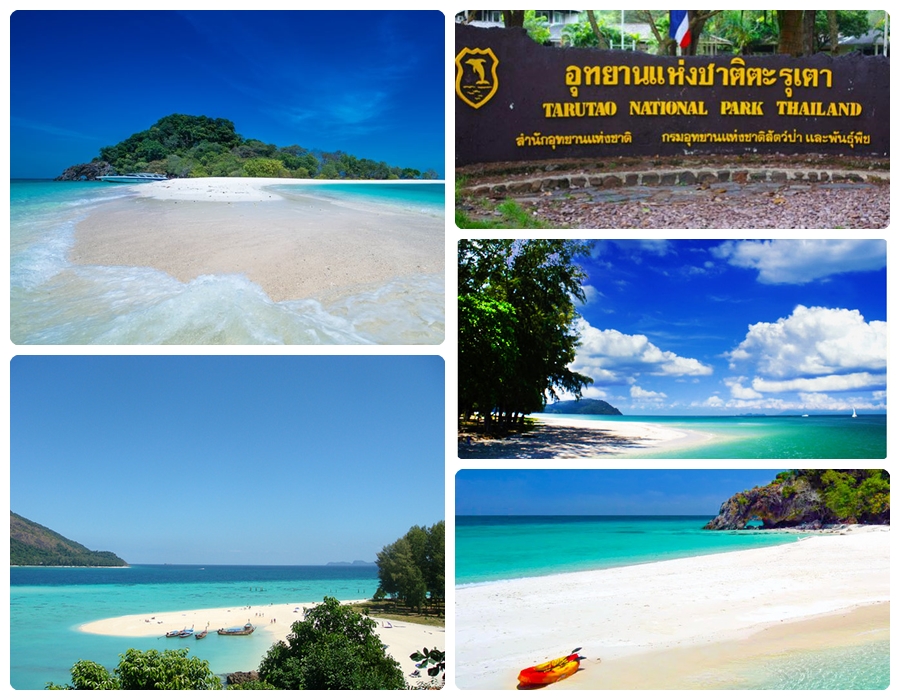 JABANG PINNACLE
* * Jabang Island is a pile of rocks out of the water, this area is called the Jabang Trench.  Near Koh Adang, between Koh Ravi and Koh Lipe.  Under the water, there are 5 tops of rock, 4 of which are covered with colorful soft corals.  Another peak is filled with many feathered stars.  Usually, to see soft corals like this, you have to scuba diving but here the soft corals are at a very shallow level.  Colorful soft corals are perched from the top of the rock and down until the depths are invisible. There are many feathered stars in this area: black and red, colorful soft corals, orange cup corals, large mortar sponges, colorful anemones, and many fishes swimming in search of food.  You may also encounter pikachu slugs, the origin of Pokemon.  Diving in this area, the current is quite strong because it is a channel, meaning the area where the water flows.  make it impossible to scuba dive  But if you dive in the calm waters, you can dive and enjoy it comfortably * * 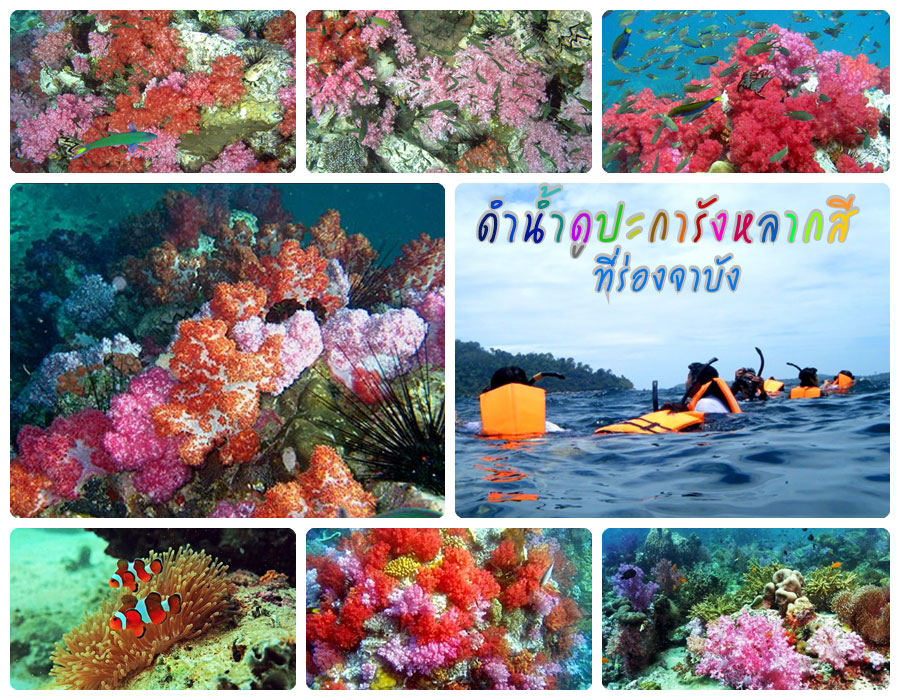 * * Walking Street Koh Lipe The beginning of the walking street is at Pattaya Beach, about 1 kilometer long until almost reaching Sunrise Beach. Walking Street will be open to some shops from 6 AM, but will start to be bustling from 6 PM until 24.00 PM. Walking Street in Koh Lipe will be shops not stalls like other walking streets.  Most of them are restaurants offering a la carte food, seafood, pizza, grilled food, roti. In addition, there are shops, 7-eleven shops, diving tours, souvenir shops, diving equipment, internet shops, drugstores, clinics * * 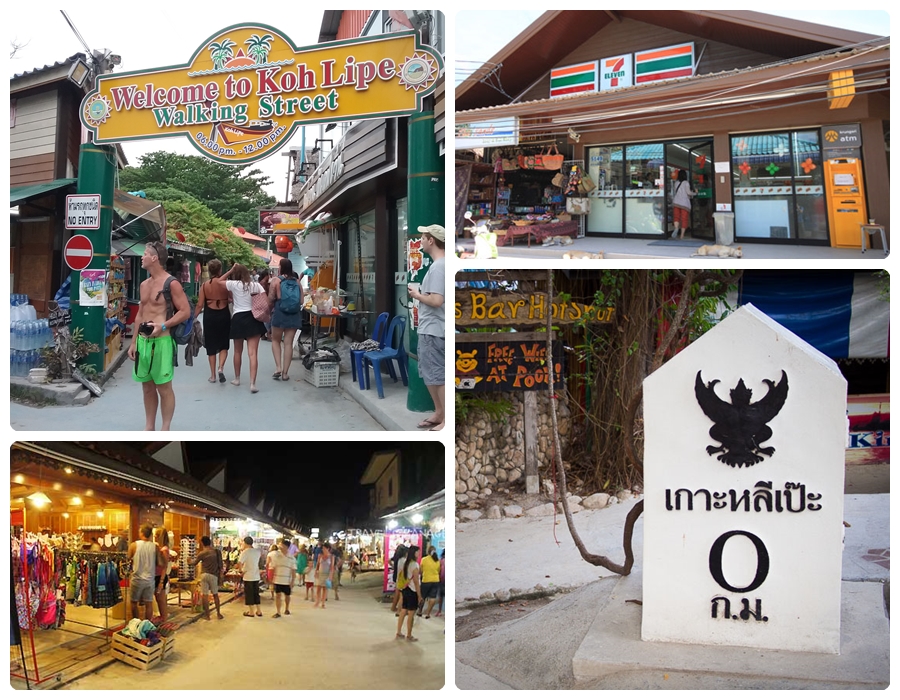